Firefox sucks, and so does everything else

I was a long-time user of Internet Explorer until maybe 1 year ago. I switched to firefox. It is better than Internet Explorer, but it still sucks. Here is what is wrong with all web browsers I have tried:

Sigh. I guess I will put this on my list of projects. Maybe I should learn how to program better first. Something based off of firefox would be best, I think.

I have written a tutorial on using the Unix utility GNU screen. Click this link to read the tutorial.

I have been using Wikipedia a lot lately. I have been editing a lot of pages too. I have read stories about the extremely dedicated users who spend hours per day editing Wikipedia stories.

This got me thinking that there has got to be a way that people will make money from their Wikipedia skills. One way is, as Wikipedia becomes more popular as a reputable source of information, companies, political groups, or religious groups might hire a full-time Wikipedia expert to support their views and polish their image.

One of my favorite websites is Cockeyed.com. If you have a sense of humor anything like mine, you will be amused there for hours on end (that is, if you haven’t been there for a while). The website’s owner/creator is Rob Cockerham. He usually updates the site once or twice a week.

Recently, Rob has decided to make a little extra dough from his site by sponsoring links and putting up ads. It started with the fatwallet ad at the top of every page. I guess I will let him slide on that, because they give him free hosting in exchange for the ad. Then came the “Websites that I Encourage You to Visit” page. Now, Rob is actually selling ad space on an actual Cockeyed content page through this auction.

We are molested every day by ads in everything we do. It would be rather unfortunate to see Cockeyed taken over by ads as well. I understand that Rob would like to make money off of his site, but I think there are better ways of doing so. He could sell Cockeyed merchandise (this is how homestarrunner.com makes money) or even just ask for donations. For now, though, I have appealed to Rob to stop the advertising, making the suggestions I have made above. To show my sincerity, I have bid $50 for the ad space. If you all are as big of cockeyed fans as I am, I implore you to chip in. Contact me at stu@fourmajor.com if you’d like to help.

I was looking for alternatives to Slashdot when I stumbled across the Slashdot Story Generator.

If you are looking for alternatives to Slashdot as well, I suggest you visit this “Quit Slashdot.org Today!” page.

This is the funniest article I have read in a long time. Evidently a crotchety old man in Virginia was pissed off at the state, and decided to dump his trash on public land.

Yahoo! today launched their new Yahoo! Music Unlimited. For $4.99/month (when paying for a whole year), you can listen to their whole music library from your Windows PC. You also have the option to pay $0.79 to burn a track to a CD.

You access their service with the Yahoo! Music Engine (pictured below). 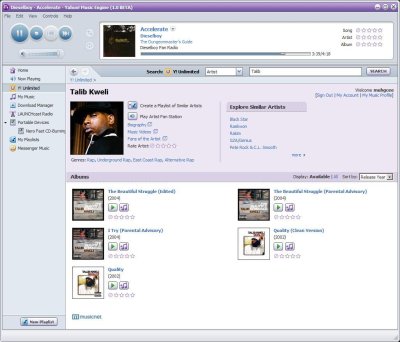 The interface is pretty nice. It is much more responsive than iTunes, which I have found to take a decent amount of time between page loads and music imports.

When I first started the Yahoo! Music Engine, I was prompted to import the music that I already had. I directed it to the C:\Music folder, and it imported all subdirectories, including files encoded in ogg, flac, and mp3 formats. I was able to go about my business exploring the program while it was busy importing my music.

I decided to put Yahoo! Unlimited to the test right from the start. One of my favorite artists is Dieselboy. I attempted to type “Dieselboy” into the search box on the Y! Unlimited page, but my text would not take. Instead, I used the “Browse By Genre” dropdown box to the right to select “Electronic / Dance” and from there choose “Jungle / Drum & Bass”. I saw several tracks listed, and I wanted to see how quickly their music would start streaming after I clicked play next to one of the tracks. When I clicked the play button, I was informed that I had to download a security update to play the music. The download seemed to go pretty quickly (I am on a fat connection at work). When I next clicked on the play button, the album art simply greyed out. This seemed to be a deal breaker, but having the classic computer mentality, I restarted the program.

And, I am now successfully listening to an artist I have never heard before “MJ Cole”. Clicking “play” on the album started playing the first song within a second. Again, I am on a fat Internet connection, but this is still impressive. I had been wondering for a while where I could find good Drum & Bass. I have now found that place.

I have not used any of the other subscription-based music services to be able to compare, but Yahoo! Unlimited does seem to be lacking in one very important area: completeness. As mentioned before, one of my favorite artists is Dieselboy. My all-time favorite is Tool. Searches on both of these artists turn up a grand total of 0 albums. This isn’t a big deal for these two artists, since I have all of their albums stored locally on my hard drive, but it does not sound good for future searches. Other artists that I have searched have missing albums. I understand that this may be very hard to acheive, but what is really needed is for this service to have very close to all the music I would ever be looking for. Then it would really be of full value to me.

A great part about this program is that it integrates countless radio stations into the interface. You can pick from a standard Launchcast station on the left, or you can choose to “Play Artist Fan Station”, which is supposedly a mix of what fans of that artist will like. In the limited time that I have listened to the Tool and Dieselboy Artist Fan Stations, I have noticed a nice correlation to the artist, and the type of music that is played on the station. I have also noticed something very peculiar. For both artists there are no albums available for download/streaming, but their songs are included in the station mix. I am sure it is some sort of licensing crap, but still annoying that they can play it on the station but you can’t stream the album as a whole.

Another note about the stations is that it can be rather awkward on some stations to not have the tracks mix together, like in almost any electronic station. The tracks were meant to be played back-to-back, so you are left with an abrupt start and ending to each track. There may be a feature to do this, but I haven’t found it yet.

Even on the first day that this program has been out, there are plugins for it. One of them is “1337 m1n1 m0d3” (pictured below) which replaces the current inadequate mini mode. 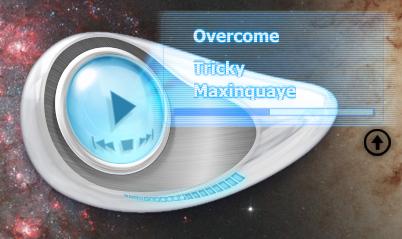 Overall, this program and service seems to have some growing to do, but being the first day that it is out, I am very impressed. $4.99/month is a bargain, and I think they realize that. This seems to be a limited-time offer. I went ahead and signed up for a year, but my card won’t be charged for another week, so I can cancel if I don’t like it!

The Internet brings about new grammar questions. A couple of examples are:

I have 3 listeners on my Internet radio station (FourMajor Radio), none of whom are me or my cousin. In fact, I don’t think I know any of them, just by looking at the IP addresses. I am playing some Yo-Yo Ma right now – maybe that was the secret.

My brother and I love the classic game Genghis Khan for the NES. I just thought of a way to play on a REAL NES over the Internet. You could make a controller emulator that plugs into a computer’s serial port on one end, and into the Nintendo controller port on the other end. Make the video and audio output go into the computer. On the remote end, have the other user plug a modified controller into their serial port, and transmit it back to the NES video/controller server. There could even be a nice all-in-one window that would display video, sound, and maybe even a clickable controller on the client side. This sounds like a lot of work, but DAMN that would be awesome. I am assuming it wouldn’t be too good for action-packed games, but it would be great for a turn-based game like Genghis Khan.