I usually fall asleep very easily. Not tonight. It is not something that particularly worries me, but a short while back I was listening to a podcast with a sleep expert and he said that if you can’t fall asleep, then you should get out of bed and write down your thoughts. Well, I have been a bit behind on updating my blog anyway, so I figured I would throw some stuff on here.

It may sound a bit cheesy, but my new year’s resolution is to lose weight. I am sparing myself the stress of worrying about it until after (the day after, to be exact) I get back from Maryland. So I will start on January 3. I will be sure to make a post that includes my current weight, my target weight, and a picture of my belly. So if you are easily creeped out by a hairy beer belly, then you might want to block all images originated from the fourmajor.com domain. I am going to do this for a before/after effect.

One thing that I have recently learned, and that I have previously written about, is that if I am to stop something, it has to be cold turkey. So for the purpose of my diet, I am going to completely abstain from all things sugary until I hit my goal weight. And same goes for grease. And mixed drinks. And non-light beer (I am not ready to give up drinking altogether, otherwise what would William and I find to do together?).

I have decided that once I hit my target weight, I am not going to allow myself to go above it. I haven’t felt this motivated about losing weight in, well, ever.

On to other news, I went from worst barber shop experience ever to best barber shop experience ever. Thanks to Yelp, I discovered 1512 Barber Shop. It is about 10 blocks from my apartment and well worth the walk. Sal is a very friendly, soft-spoken, and professional barber. For the first time in my life, I made an appointment to get a hair cut, and surprisingly I didn’t feel strange doing it. A two-chair barber shop, 1512 has been open for about six months, and I learned that Sal had most or all of the furniture custom made in Mexico. Even though it has been open for such a short time, the barber shop really has the feeling that it has been around for a long time. It was the most I have ever spent for a haircut ($20), and I felt like it should have cost more. I think I will go there once a month and get a haircut and a straight-razor shave. Sal described it as taking an hour and a half and being like a massage. Sounds like a man’s version of a pedicure. Count me in.

Last but absolutely not least, I have recently returned from Maui, where I was vacationing for a week with Alyssa’s family. What a great time we had. I was fortunate enough to have joined them on the trip in which they stayed in the nicest condos they have had yet. The view from our condo was absolutely beautiful. We ate like kings (I have never had such tasty pineapple!), I learned of a great Hawaiian breakfast (papaya topped with banana), we had the best sushi I have ever tasted at Sensei’s and the best overall meal I have had in a long time at a restaurant, the name of which I don’t remember. And to top it all off, I ate the most in one sitting that I have in a long time (three t-bone steaks; I really don’t know how I did it).

Other than eating, which by itself would have made it a great week, we went snorkeling at Molokini and we went to the Ocean Center. Just how I like it, the vacation wasn’t too jam-packed with activities, leaving plenty of time to bum around and read.

I kind of feel like a bum, having not earned almost any money since September and taking two straight vacations. Yet I know that I accomplished something very valuable in those months and when I get back to San Francisco on the 2nd, I will have months of hard work ahead of me, both at work and on my new year’s resolution, before I have my next major break.

I leave you with this picture of the view from our condo in Maui: 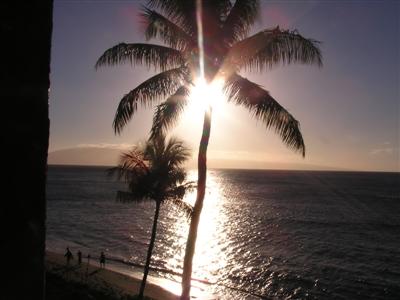 « Work Update at One Week
Well, That’s One Way to Start my Diet »